The suspension method of the flat loop sling is particularly important when hoisting objects. When Polyester Flat Webbing Sling laying out the sling according to the requirements of the sling, it should be noted that the stitched synthetic fiber webbing should not be twisted or twisted. Because only in this way can it be ensured that the flat lifting belt does not affect its own load breaking force during lifting. When using a loop sling to lift an object. 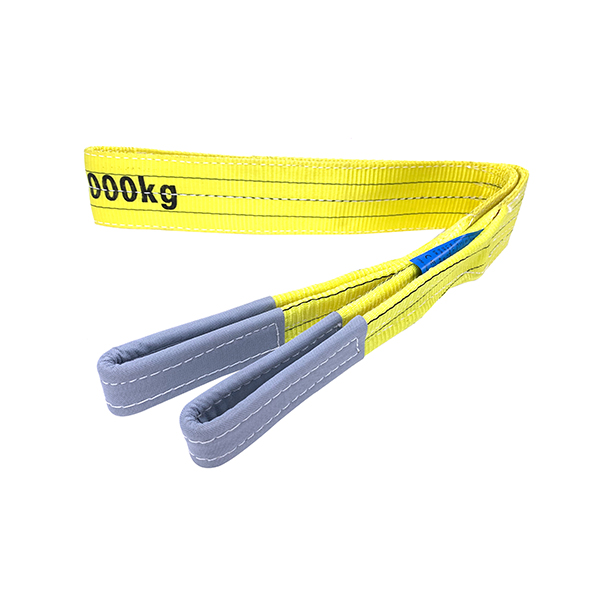 It is easy to make the same mistakes as the arrangement of the strap tensioner during the arrangement process, which is the phenomenon of twisting and twisting when the webbing is in contact with the object. If this phenomenon is not discovered and corrected in time before hoisting, it will affect the load of the hoisting belt. The result is like the phenomenon that objects are scattered during transportation due to twisting and twisting of the tensioner strap.

The damage caused by the scattered objects during the lifting belt is much more serious than the scattered objects during the transportation of the lashing belt, so be sure to pay attention. The influence of synthetic fiber hoisting belt layout error during hoisting has a great influence on hoisting load. For example, if an object is lifted using a six-fold 3 ton ring-shaped lifting belt, the twisting and twisting phenomenon may not be found during the arrangement.

Then the breaking force of 18 tons of polyester sling can only be in the range of more than 10 tons and less than 15 tons. At this time, as long as a little uncontrollable factor occurs in the lifting, it will cause a sling accident. Therefore, when the flat hoisting belt is suspended before hoisting, it is necessary to carefully verify the arrangement of the webbing to avoid accidents caused by the twisting and twisting of the synthetic fiber hoisting belt due to negligence.

PREV: Fastening belt buckles and what are their uses
Wholesale Green Single Ply Cover Polyester Round Sling :NEXT